I am trying to figure out CentOS 7 unattended network (PXE) installations in my setup, but the installer always ends up running into a black screen without interaction options. This is being tried in a 64-bit VM (VMWare Workstation or Oracle VirtualBox).

The installer Kernel and initrd images have been sourced via rsync -av from here: rsync.hrz.tu-chemnitz.de::ftp/pub/linux/centos/7/os/x86_64/images/pxeboot/ and were placed in the TFTP server’s directory.

The installation seems to lift off normally, the Kernel boots up, initrd is loaded and startup scripts loading the kickstart file and the installer data off my repository server (via HTTP) have run more or less without errors:

At this stage, attempts to download updates.img and product.img are reported as failing as they are not present in the repository I am using.

The install seems to proceed without errors: 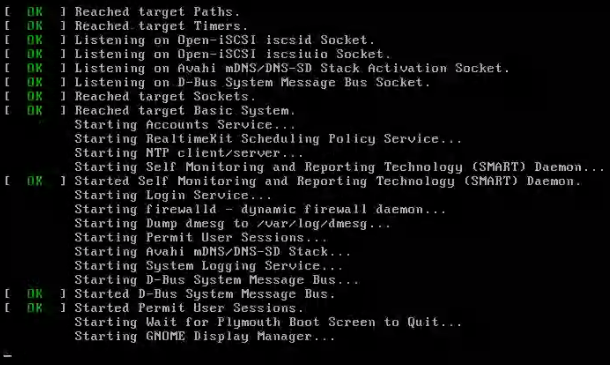 up to the point where it is mentioning that GNOME has started:

after which there is a screen mode switch and everything goes blank. Console switch attempts using Ctrl+Alt+Fx do not work do work if I am persistent enough (it takes 2-3 hits to F3 to actually switch the console), where I can see that X has been started (by /usr/sbin/gdm) and is apparently hanging somewhere – the /var/log/Xorg.0.log file shows that VESA VBE drivers and input device drivers have been loaded successfully a suitable VESA mode has been chosen (0x144), yet it seems to stop there. From here, I can start /sbin/anaconda and the installer is running following the directives from the Kickstart config – if I have specified text in there, I can see the installer succeed and create a bootable system.

Things tried so far without success:

What is going wrong here and how would I fix my install?

What is this about GNOME Display Manager? That shouldn’t be present on an installation-only media. The fact that it is present makes me think you mistakenly downloaded a live media image. Go back to your mirror and get the correct netinstall image.