In order to enable the client to connect we have to add the network manually and un-check the “Validate server certificate” as shown in the screenshot below.

Does anyone know of a way to avoid having to do this? We are perfectly willing to buy a certificate from Verisign, Thwarte, etc if it will help but have tried our Comodo wildcard SSL certificate which hasn’t fixed it.

These machines belong to the end users so we can’t easily control settings with group policy or registry hacks. 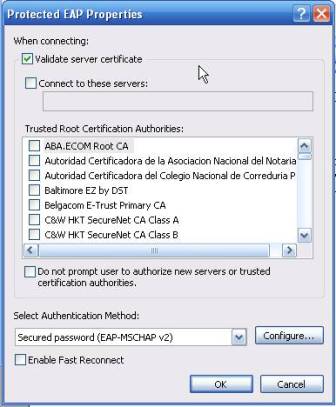 I just deployed a setup very similar to this last week, to provide Internet access to a week-long campground event. This is the approach I used and some lessons learned:

First, I used multiple SSIDs to provide the primary network on WPA2-Enterprise, and an open network for user enrollment. The open network redirects to a custom captive portal (using HTTPS and a normal certificate issued by a CA) where users signed up and provided payment information. After payment is complete, users are enabled in the RADIUS database, and can then reconnect to the WPA2-Enterprise SSID to get online.

Since I had a hard deadline to get it up and running, it was only tested with Android and iOS, neither of which had any real problem. In production I learned pretty quickly that Windows didn’t like it at all.

To avoid all this trouble, in the next iteration (i.e. next year) I plan to offer to install the server certificate directly from the captive portal, so that users (mostly Windows users) won’t have an issue logging into the secure network.