I’m trying to configure a 2 node cluster with shared storage, but the configuration is probably little unusual. It is described below:

The picture below illustrates the setup. 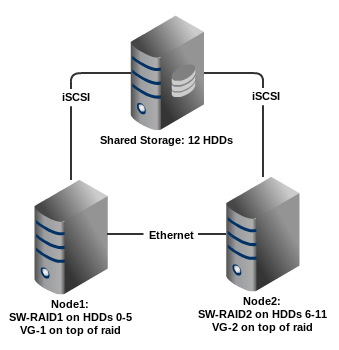 The question is: can I use plain LVM for this kind of setup or do I have to go with clustered LVM?

To my thinking I can use plain LVM because each volume group reseeds on an entity (/dev/md*) that is never going to be available on both nodes at a time (ensured by the cluster as it manages the above s/w RAIDs), so from LVM’s perspective it is not even A/P.

Am I right? When answering, please, provide some reasoning if possible. Thanks!

If I’m reading your question right, I think you’re looking for DRBD. This will transparently keep the two servers’ disks in sync, allowing one to fail over to the other without data loss.